The Ancestral Trail #1: The Moss Beast 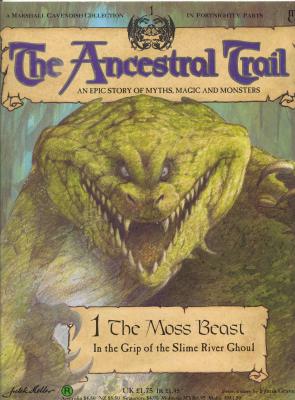 In the Grip of the Slime River Ghoul

Should evil e'er the Victor be,
And darkness fall upon the land,
A Chose One from far will come
Who sees in dark and light.
On the first day, herein points the way.
To cross the river he follows the flow.
From air and water dangers.
Safety lies in earth below.
At path's end lies the slender way,
A hidden weakness saves the day.

As Richard and Orkan press deeper into the forest, Orkan tells Richard of his experiences during the final battle and of his escape from the Evil One's forces. He tells Richard of when he was surrounded by three enemy soldiers but was lucky enough to escape with a deep scar on his fighting arm. The pig-man grows sad as he recalls how many of the beasts he had to fight were once friends and neighbors, but he feels hopeful that the survivors can regroup. 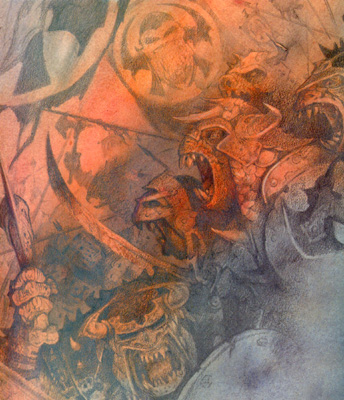 Just then, Orkan hears something and realizes that somebody is nearby. He leads Richard carefully to behind a cottage-sized boulder...and finds an old dwarf-like man sleeping. Orkan quickly kicks the dwarf, awakening him. The stunned dwarf introduces himself as Melek, a scribe from the Ancent City. But before he could say anything more, Melek notices Richard's eyes and instantly recognizes him as the Chosen One. Excited, Melek unstraps a large book from his back. The book is called the Book of Prophecies, and it foretells of the Chosen One. However, the book is written in rhyme and riddle, and not even the Guardians can figure them out. 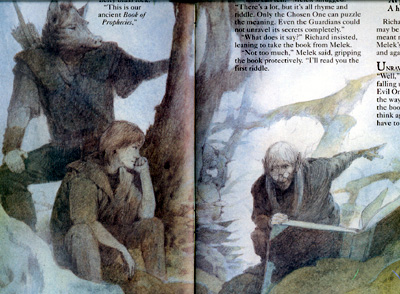 Melek reads the first riddle, which initially puzzles Richard. However, he realizes that they should follow the nearby stream that they may cross the river it should lead to, the river mentioned in the book. Feeling more confident, Richard leads Orkan and Melek along the stream's path. Eventually, they arrive in an open plain, where the stream has opened into a river. There are even a line of stepping stones for them to use to cross over. However, before they can progress further, a steady drone is heard. Orkan instantly recognizes the drone as Grapfrits - flying insect-like beasts that can suck a person dry in seconds - and orders everyone to hide. 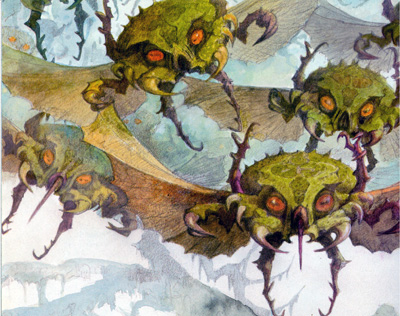 Orkan and Melek manage to hide, but Richard is caught out in the open. As the Grapfrits emerge from the forest and swarm in Richard's direction, Richard remembers the tunic Golan gave him and places the hood over his head, rendering him invisible. The Grapfrits are instantly confused by Richard's disappearance, but they linger a little longer. Grapfrits have poor eyesight, but they can hear him. One Grapfrit even hovers directly in front of Richard's left eye and extends its needle-like stinger. But then, suddenly, the Grapfrits give up and leave, retreating into the trees.

Richard removes the cloak's hood and Orkan and Melek emerge from hiding. Orkan quickly suggests they cross the river via the stepping stones in case the Grapfrits return. Richard agrees, but Melek recalls the prophecy stating that "safety lies in earth below". Orkan and Richard still decide to use the stones, even though Richard sensed Golan's voice telling him not to do so. Determined to find the tunnel, Melek parts ways with Richard and Orkan, who begin hopping across the stones.

Melek searches along an old tree, wondering if he's making a fool of himself, when he slips and begins falling downthe steep bank. As he slides down the edge, he reaches out and grabs at the tree's roots, which stops his fall. To his amazement, however, he realizes that the root he had grabbed is in fact an old piece of rope, indicating he was on the right track. Then, hanging from the rope, he notices a hole...no, a tunnel in the bank. Smiling, he worms his way down the rope and into the tunnel, taking the rope with him on a compulsion. He begins moving down the tunnel towards the other end. As he does, he hears a curous scraping sound above him, as if something were trying to dig down to get him. 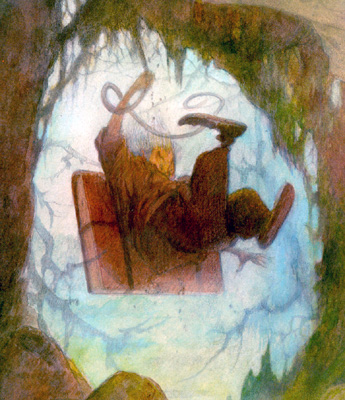 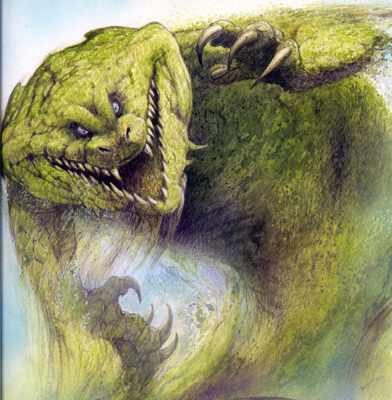 The moss beast spots Richard Orkan and demands to know who they are, claiming they've trespassed in her domain. Richard nervously asks who the creature is; the creature, who calls herself Sumar, is enraged that they do not know of her. While transfixed on Sumar with horror, Richard realizes that Sumar cannot move when her claws are above water, meaning she uses those claws to drag herself along the river bed. If he and Orkan were to escape, they had to make a move now.

Melek makes the move for him. He rushes to the edge of the river bank and tosses his trapped friends the old rope. Sumar roars in fury and disappears under the river. Richard and Orkan quickly and kick their legs to free themselves from the slime as Melek pulls them. Orkan and Rirchard eventually managed to free themselves and are pulled to safety moments before Sumar's claw surfaces and takes a swipe at Richard's leg. 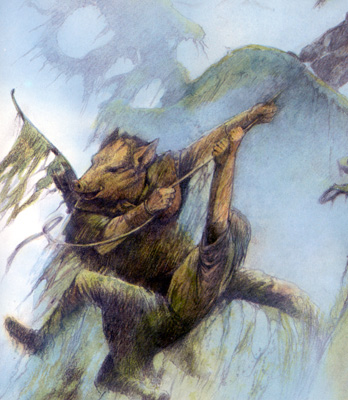 The three companions run as fast as they could away from the river, leaving Sumar to scream in frustration. Richard quietly tells himself that he would never disregard Golan's voice inside his head again. Not wanting to be caught out in the opening again, he looks around for a good place to hide. He spots a clump of boulders and leads his friends in their direction. But when he reaches the boulders along with Melek, he realizes that Orkan is missing. 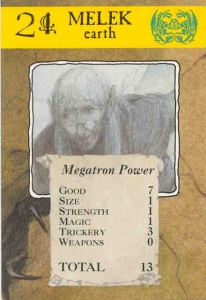 Melek of Antona was once a scribe in the library of the Ancient City, but when the Evil One appeared the city fell under his dark rule, he was forced to flee for his life. He managed to save the ancient Book of Prophecies from the vaults before the city fell in the final battle. He hid in the nearby forests until he ran into Orkan and Richard, the latter of whom he recognized as the Chosen One. Now the keeper of the prophecies that will guide the Chosen One on his quest, Melek may prove more useful to Richard's journey than he first appears. 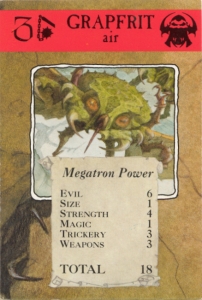 Grapfrits are insect-like creatures that fly in large swarms in the forests of the Ancestral World. Using their needle-like proboscises, they can suck a person dry in a manner of seconds. When all fluids have been drained, then they go after the bone marrow. However, Grapfrits had terrible eyesight, so it's best to be well hidden in their presence and not make much of a sound. 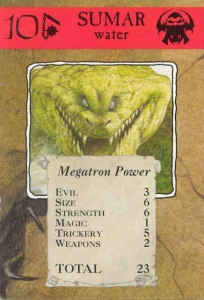 Sumar the moss beast is a giant swamp creature that dwells within the Slime River located in the Mossy Valley. She lures her prey into a false sense of security by posing as a set of stepping stones that span across the slimy river. When someone tries to walk across her, she makes her move, causing her victims to fall into the slime that instantly traps them. She can tear a person to pieces with her powerful claws, but when her claws are above water she cannot move through her own slimy domain; she has to use her claws to drag herself across the riverbed.

"Downstream, the water was bubbling like a giant jacuzzi. Then its raging surface erupted to reveal, bit by horrible bit, the most frightening creature Richard had ever seen in his life. First to emerge was the top of the creature's head, dripping with slimy moss. Then came a pair of small, beady eyes followed by nostrils that snorted water in all directions. Worst of all was the mouth - a huge, gaping hole fringed with an array of razor-sharp fangs. Water poured from it in torrents, and Richard could just make out chunks of decaying flesh clinging to the creature's teeth. Richard gaped in horror as he saw the creature's long, raking talons which oozed with fresh mud." 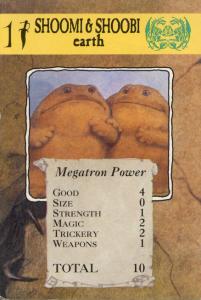 The first issue of The Ancestral Trail marks an important point in the story by introducing Melek, the dwarf scribe who carries the Book of Prophecies. It's these prophecies that will guide Richard on his journey so that he will know what choices he needs to make. Each prophecy is designated by a day - "On the First Day...", etc. - so twenty-six prophecies will be read by the time Richard's journey through the Ancestral World is complete.

The first powerful monster that Richard encounters on his travels is the moss beast Sumar. However, his encounter did not result in a mighty battle with the moss beast. Instead, Richard was at the creature's mercy until his friend helped him barely escape with his life. In my opinion, this is a good way to show that Richard is still maturing. If Richard had fought the moss beast, even if only to distract it, that would've seemed extremely unrealistic, since Richard has had no combat experience at all. He learns from his encounter with Sumar (as well as the Grapfrits) that there are dangerous beasts out there and that he needs to adapt if he is to survive.

The first issue also introduces something really important to a fortnightly series like this: cliffhangers. At the end of the first issue, Orkan is nowhere to be found. Thanks to this, the reader will eagerly anticipate the next issue to see what happened to Orkan. Was he captured by the enemy? Was he killed by something? Or was he a traitor? For a serialized fiction story like this, this kind of thing is necessary to entice the readers to continue reading.


"Feel the fear. You have transgressed on my domain and I shall destroy you."

-Sumar
Richard: "I don't know where you found the strength, but you certainly saved our lives."
Melek: "It was nothing."
Orkan: "Quite."
Melek: "What do you mean, 'quite'?"

Comments:
=O I've been looking for the Ancestral Trail Magazines for AGES!! I had a few when i was younger but i haven't got a clue where to get them from in the UK.

Wooowwww!!! I just got hit across the head with nostalgia so hard I almost fainted. I LOVED this series, it was a huge part of my childhood and got me interested in art and design. Thanks so much for the awesome blog guy. Leigh, South Africa

This website is full of WIN!!!! You are AWESOME!!!! I am currently 2000km from my box set.....why they hell don't they have a movie on the first season? the story is a damn sight better than the bloody lord of the rings.
Oh i had a pet pig growing up called Orkan.....even on his regestration papers :)

Thank you so much for making this site,I had a few of the books when I was younger but my folks stopped buying them for me,that was back in the early 90s! now I can finally read them again and see how it ends.EPIC
Matt from New Zealand

To contact me, send email to arxane (at) gmail (dot) com